The output spacing for group catalogues and snaphots has been selected as follows:

All together 265 dump times. At these dump times, the FOF and SUBFIND-HBT group finders have always been run, and the merger tree builder routine establishes on-the-fly links to previous output times. Also, matter power spectra are computed and stored. (For some runs, a few extra dumps at intermediate times were actually produced, due to a hick-up in the routine that selects the output times after a code restart - this means that for some simulations we have actually 266 or even 269 output times. This unfortunately slightly complicates the matching of equal-time output numbers between runs, but the intended 265 times are always available for all runs.)

Full snapshot data is stored in files with names

which contain only those particles that used to be a most-bound particle of a subhalo sometime in the past. These particles can be used to approximately track in semi-analytic models so-called orphaned galaxies whose dark matter substructure has been disrupted. After the merger trees have been created, the code converts the files into

which represent a reshuffling of the particle data in the order of the trees to which each particle belongs. 'Belonging' here means that the subhalo(s) in which a given particle was most bound are associated with the particle, and in turn the particle is associated with the tree these subhalos are in. (Note that the tree construction makes sure that all subhalos a give particle belongs to are always in the same tree, hence assignment of a particle ID to a tree ID is unique.) When the L-Galaxies semi-analytic model processes a tree, it can retrieve the particle data of just its tree (any nothing more) from the snapshot-prevmostboundonly-treeorder files in order to update the phase-space coordinates of orphaned galaxies.

Group catalogues are saved in the majority of cases without explicit particle data, i.e. all available group and subhalo information must be computed on the fly.

Group data is stored in

The following properties are currently stored in the group/subhalo catalogues. 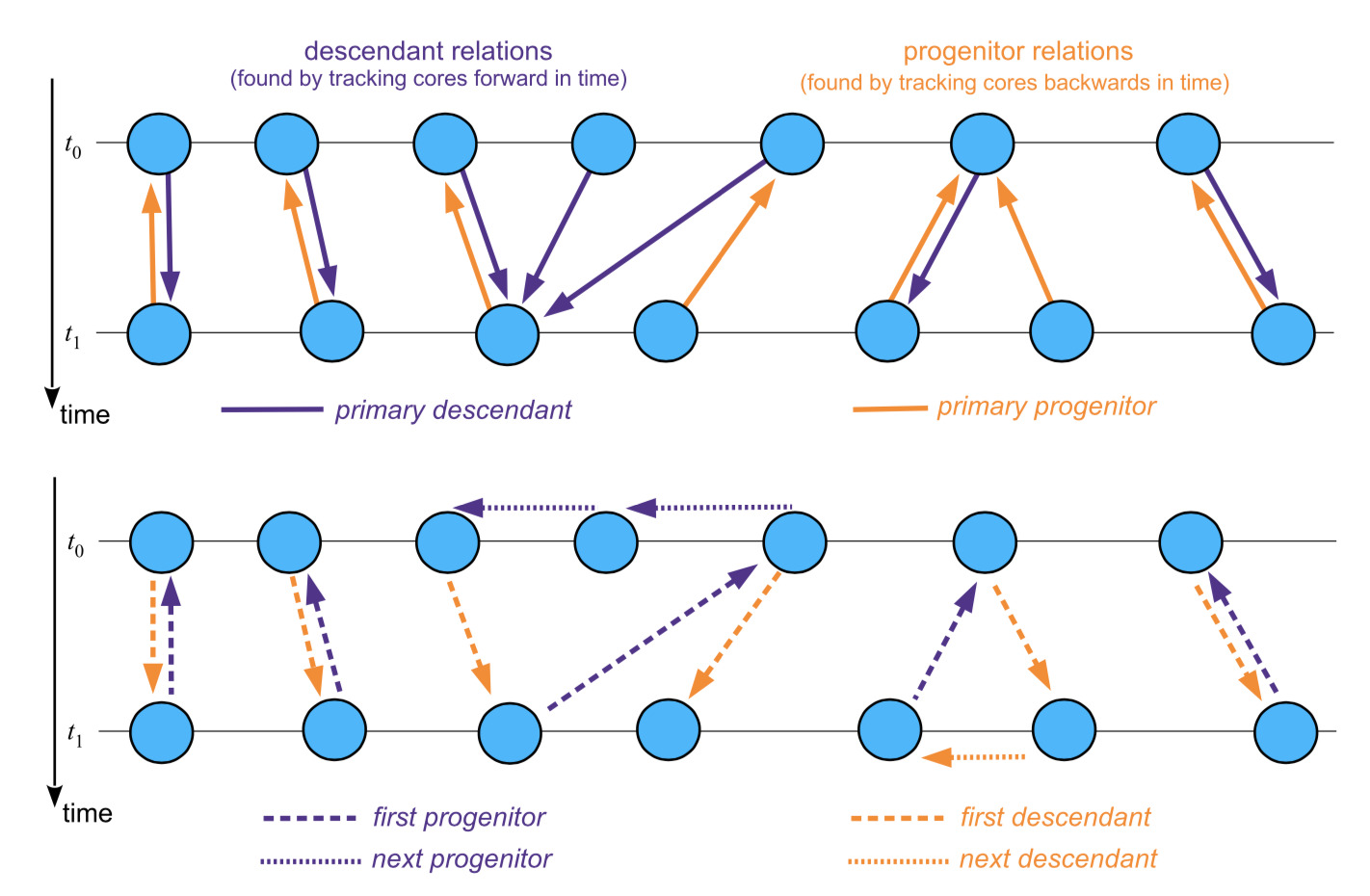 At the end of a simulation run, the code is restarted in a special mode to combine all this linking information into more easily accessible merger trees, but in principle these files can also be accessed, if desired, to hop from one instant forward or backwards in time.

The merger tree data combines all the group/subhalo catalogue information into a set of merger trees that can be read individually. Conceptually, the tree is organized as sketched below (described in detail in the GADGET-4 code paper):

The trees are stored in files with name

where Y enumerates the files making up the full catalogue when split over several files in the multi-file format.

When the trees are made, the code also creates further auxiliary files named

These tell for each subhalo in which tree and at which place within the tree the corresponding subhalo can be found. One can then selectively load this tree if desired and examine the history and fate of the subhalo.

A set of different lightcones is produced by each run (periodic box replication is automatically applied to the extent necessary to fill the geometry of the specified cone):

Each lightcone is stored in its separate directory, and the individual lightcones are broken up into onion-like shells with a numbering increasing from high redshift to low redshift. This is because the code buffers lightcone data internally, and outputs a new shell whenever the buffer is full. The redshift boundaries of these onion shells have no particular meaning, and vary for different simulations. The lightcone data is stored in files

where NN denotes the cone number, XXXX is the shell number, and Y the filenumber within the mult-file output for the current shell. The actual particle data of the lightcone output are stored in a format closely analogous to snapshot files, but within each onion-like shell, the particles are stored in healpix order (in principle, the code could also find groups and subhalos directly among the lightcone particles, but we have not enabled this feature because it is not necessary for the semi-analytics). Combined with an offset table to the first particle in each healpix pixel, this allows selective reads of certain regions of the sky, if desired. Besides positions and velocities, the total peculiar gravitational accleration is also stored for particles crossing the lightcone.

For cone #4, the lightcone data is available in a secondary reshuffled order, with filenames of the form

Here, the particle data within each shell (which consists only of previously most bound particles in subhalos) is reshuffled such that they are stored in sequence of the trees to which the particles belong (see also the discussion for the snapshot-prevmostboundonly-treeorder files). Similar to snapshot-prevmostboundonly-treeorder, this serves to allow the semi-analytic code update in an exact fashion the phase-space coordinates of subhalos and orphan galaxies when they cross the lightcone.

For weak-lensing applications, we create onion-like shells of the full particle light cone onto a healpix tesselation of the sky. The comoving depth of these shells is 25 Mpc/h, and they go out to redshift z=5, giving 216 such maps in total.

The number of pixels in each maps is

and in the highest resolution maps we go up to Nside = 12288, yielding 1.8 billion pixels and a 0.28 arcmin angular resolution of the mass maps. The filenames of these mass projections are

As mentioned above, matter power spectra are measured for all defined dump times (both for the total matter, and where available separately for baryons and dark matter). Three power spectra measurements are done each time, applying the folding technique twice with folding factors of 16 and 16^2. Combination of the measurements allows coverage of the full spatial dynamic range of the simulations, for k-ranges that reach well below the softening scale.

The power spectra are stored in the files named

and for the hydrodynamical runs in addition in

While the merger trees in the HDF5 files treedata/trees.Y.hdf5, and the most-bound particle data in snapdir_XXX\snapshot-prevmostboundonly-treeorder_XXX.Y.hdf5, allow the semi-analytic code L-Galaxies to access all input data for processing of a tree in a convenient way (and in particular without the need to read any extra data from other trees), the I/O is nevertheless slowed down tremendously by the overhead of having to open a large number of files to collect the data (due to the distribution of the data across a larger number of output times, and across multiple files each time), and then fast forwarding in the files to a number of different positions. The HDF5 library, in particular, adds significant additional overhead to this, which is further amplified by our decision to store some of the fields with lossless on-the-fly compression (transparently applied by HDF5) to save disk space. This overhead is so large that running the semi-analytic code is completely dominated by it. We are talking of a slowdown by more than a factor of 100 here.

In order to circumvent this issue, the HDF5 input files for L-Galaxies have additionally been recast into a binary flat file structure, where all the data needed for one tree is stored in a contiguous block and can thus be read with a single read-statement. This eliminates the HDF5 overhead and only one file opening operation is needed at start-up of the code. These flat files are called

and can be viewed as (pretty large) scratch files that do not need to be archived long-term, but can always be recomputed as needed to make L-Galaxies run faster.

From here you can search these documents. Enter your search terms below.